After taking the last two seasons off, fifty-year-old world No. 65 Eric Christiansen teamed with unranked William Hartigan to reach the main draw after pulling off two qualifying upsets. The unseeded duo first surprised world No. 63 Alex Domenick & world No. 42 Dylan Patterson in three games, then recovering from two games down to defeat world No. 60 Peter Kelly & world No. 19 Jacques Swanepoel.

Leach, who was a NYAC teaching professional for seven years, and Russell, who was a NYAC professional for five years, made their SDA debut as partners in the most recent full-ranking event—the Maryland Club Open. In Baltimore, Russell & Leached faced two pairs of Trinity alums: first defeating Shaun Johnstone & Jacques Swanepoel in a five-game quarterfinal, then losing in four against Manek Mathur & Yvain Badan in the semifinals.

Up until Sunday, Mudge & Gould had been unbeaten since the final of last December’s Briggs Cup, in which Leach and former partner Paul Price defeated the Australian favorites in five.

One of the longest matches in pro doubles history ensued with a total duration of three hours. The sides split the first two games with well-contested rallies throughout the match. At 14-14 in the third, Mudge & Gould earned a 2-1 advantage with a blinding roll corner.

Russell & Leach continued to frustrate Mudge & Gould with impressive shot-making of their own, as well as forcing uncharacteristic unforced errors from the Aussies to force a fifth game. With all participants visibly exhausted in the fifth, Russell & Leach maintained a steady lead throughout the game, which they managed to hold onto closing the match 10-15, 15-13, 14-15, 15-12, 15-13.

Russell & Leach’s next challenge was recovering for the final on Monday night.

“The semifinal was long and hard, every rally was well-contested,” Russell said after the final. “I did a lot of stretching and icing Sunday night. More stretching this morning, and I actually did a few lessons today, which I think helped with loosening up.”

“You’ve got to have a certain mindset and intensity to beat those guys,” Leach continued. “I always say, if you’re ever going to beat them, you need to be on court for at least two hours, and that’s the mindset. It’s just having the mindset on court of going the maximum distance and time. You can absorb all of the pressure, and it’s literally time that beats them. The quality all of the way through the match was there. All of our bodies at the end were spent. I was cramping, Mudge was absolutely exhausted, and I think that just shows you the quality of squash doubles at the top level, which I think is great for the game.”

In the bottom half of the draw, second-seeded world No. 5 Manek Mathur & world No. 4 Yvain Badan held off the emerging partnership and fellow Trinity alums, world No. 10 Mike Ferreira & world No. 9 Jonny Smith, in a four-game semifinal setting up a rematch of their Maryland Club Open semifinal against Russell & Leach.

To the home crowd’s delight, Russell & Leach mustered the strength to defeat the younger team, despite dropping the third game to what seemed to be a reinvigorated Mathur & Badan. Russell & Leach closed out the fourth with a flurry of winners and unforced errors by their opponents 15-13, 15-12, 12-15, 15-13.

“I felt pretty good on court today. It might not have been the same result had we have gone five, so very happy with how it turned out,” Russell admitted.

“Believe it or not, I woke up feeling quietly confident,” Leach said. “I was a bit tight in the morning, but when I got into the game, I was actually feeling really high in confidence and felt pretty springy. There’s always that question mark going into a game after a hard match the night before, how are you going to be? Flat-footed or ready, and I was actually very happy with my movement.”

The home support was certainly partial to their former professionals throughout the tournament.

“A lot of friendly faces out there,” Russell said. “A lot of people I know and I like. I worked here for five years, Clive was here a bit longer and we played a lot of doubles together on this court together with members so we know the court well and I think it showed this weekend.”

“I have really fond memories here,” Leach reflected. “I was here for seven years, know all of the guys here, and I felt the support out there today. I really did. That’s a huge confidence booster, and I love that from a personal standpoint.

Russell, who also coaches at Episcopal Academy, and Leach will be selective with their tournaments throughout the rest of the season as they balance other coaching roles, but are unsurprisingly pleased with their performances together.

“We’ve played with each other before, we know each other’s games,” Russell said of his fellow Englishman. “We seem to be complementing each other well at the moment, so far so good.”

“Me and John go back a long time even though I’m seven years older than him,” Leach said. “He’s an amazing talent, he’s got beautiful hand speed. He’s got variation, and changes it up throughout the game. He’s such a creative player. Russell sticks in with you and gives you this positive vibe. If you see his body language, he comes across and encourages you. He’s a great teammate and a joy to play with.”

Russell and Leach will not be competing in the tour’s next competition, the PDC Cup in Atlanta, Georgia this weekend.

View more images from the weekend on the US Squash SmugMug page. 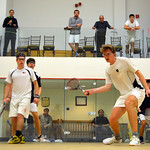 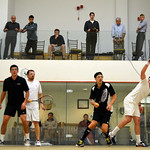 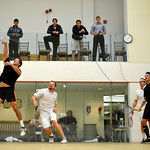 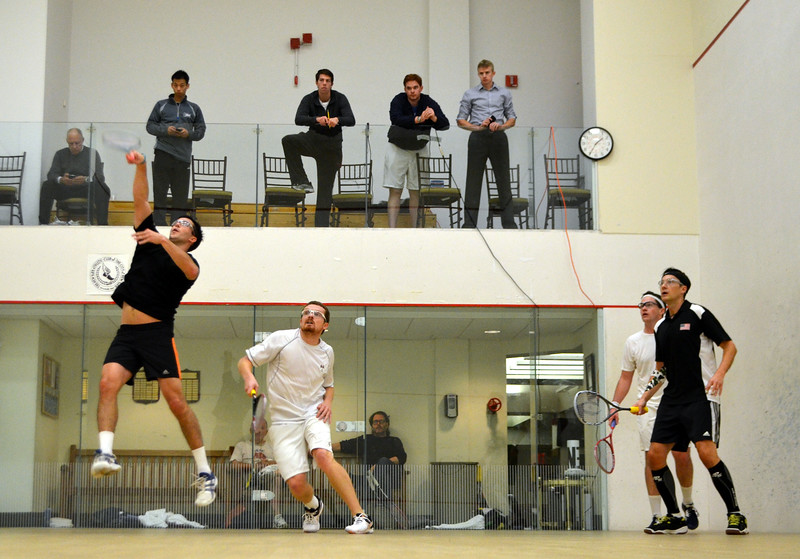 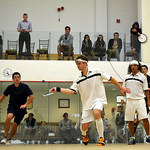 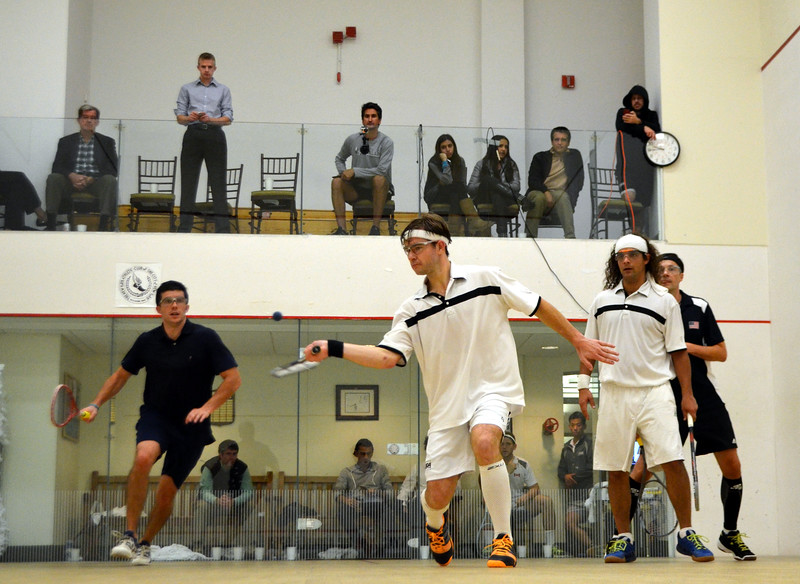 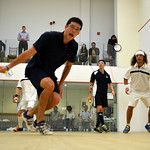 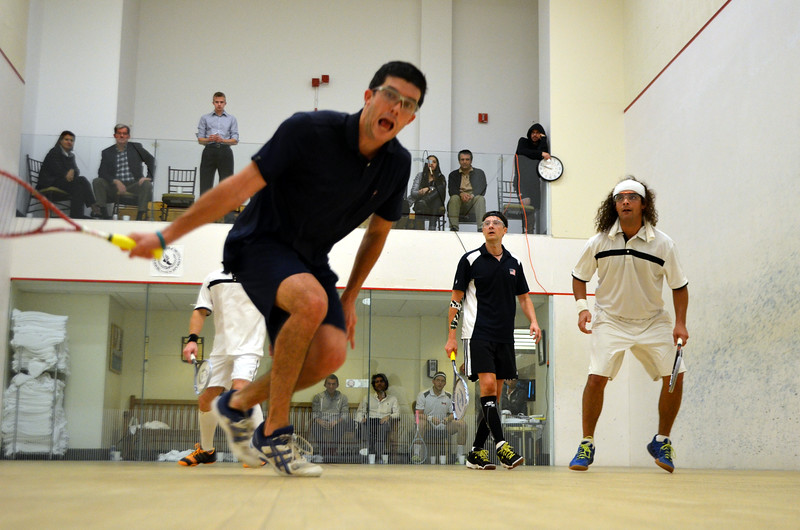 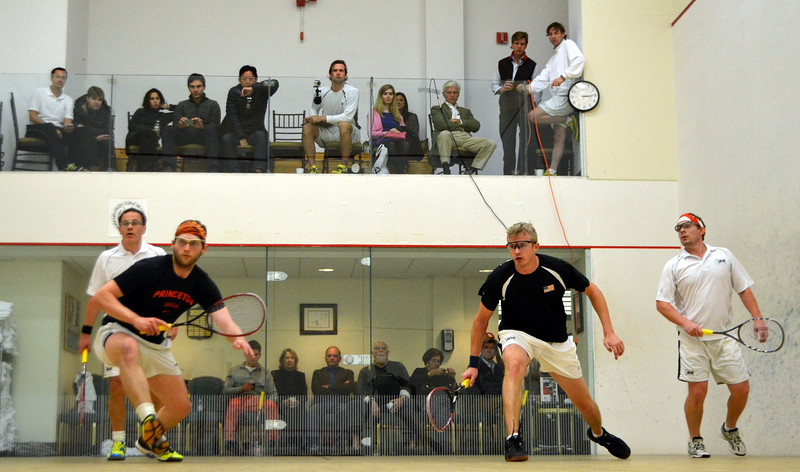 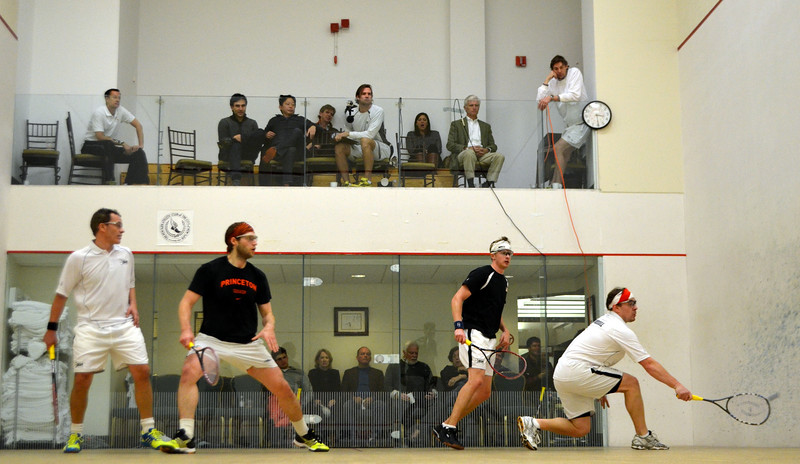 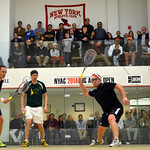 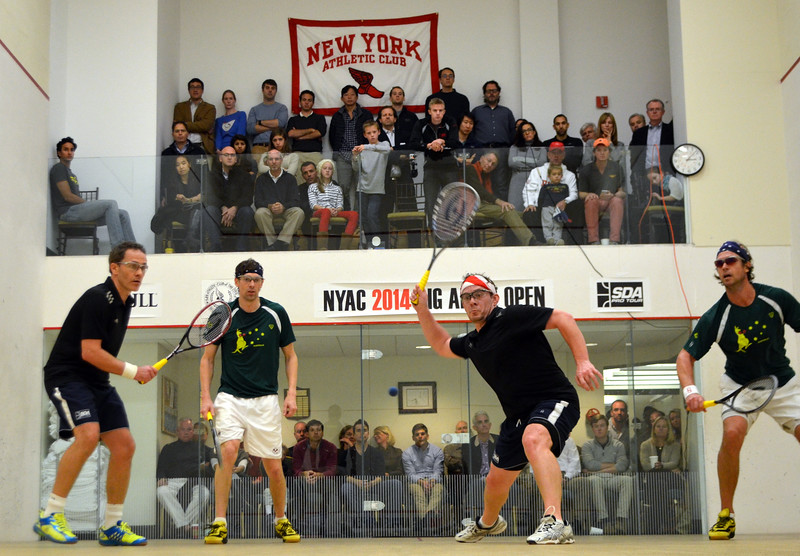 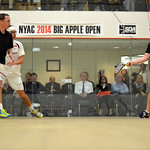