With the 2015 J.P Morgan and Trunk Club World Doubles Championships looming next week, defending world and Kellner Cup champions Damien Mudge & Ben Gould made a strong statement of intent to retain both titles by first claiming the $50,000 Kellner Cup in the SDA season finale Monday night.

Unlike the 2013 World Doubles hosted in New York City, which absorbed and incorporated the biennial Kellner Cup, the tournaments separated in 2015 with the Kellner Cup maintaining its perennial host clubs—The University Club, Union Club, and Racquet & Tennis Club—and the biennial World Squash Federation World Doubles—a non-ranking event—moving to Chicago for the first time in the tournament’s history.

Regarded as one of the most prestigious SDA events on the calendar with one of the highest prize money purses since its inception in 2000, the Kellner Cup aptly marked the close of the 2014-2015 SDA season with one of the most competitive fields of the season including four qualification draws and a sixteen-team main draw.

Of the four qualifiers, recently-crowned Canadian national doubles champions Robin Clarke & Scott Arnold reasserted their ascendency in their first season as regular fixtures on the tour. The joint world No. 31’s dubbed “the two towers” were the only qualifiers to reach the quarters, pulling off a decisive three-game upset over world No. 12 Imran Khan and world No. 15 Freddie Reid. Clarke & Arnold’s season then came to an end in the quarters after falling to eventual finalists Manek Mathur & Yvain Badan.

Russell & Leach survived a quarterfinal scare, however, winning the fifth game 15-13 to reach the semifinals against top-seeded Damien Mudge & Ben Gould. In what could be a precursor for the anticipated World Doubles final, England’s world doubles two seeds provided the Australian world champions with their most difficult challenge of the tournament, losing the first game on simultaneous game ball 15-14, and winning the second game 15-9. The world No. 1’s recovered drastically in the third 15-3, before claiming their place in the Monday’s final.

The last final of the season fittingly came down between the tour’s top two teams over the past two seasons. The two sides had previously met in nine finals against one another this season, with Mudge & Gould winning all but the PDC Cup final in November.

Playing in front of a packed, vocal Racquet & Tennis Club gallery—including the tournament’s namesake George Kellner who was presented with R & T’s Tony Adams Award before the match—the final started with blistering pace from both sides with Gould shooting a number of impressive winners to claim the first game 15-13. The Australians pulled away early in the second game as Gould continued to shoot out the lights with volley nicks, and trademark drives to win the second 15-9. Mudge & Gould produced a similar third game pulling ahead through winners and unforced errors by Mathur & Badan to claim the title in three games.

After the final, the finalists took to the court for a trophy presentation where each side paid their respects to one another upon the completion of the third professional doubles season under the SDA aegis.

For both India’s Mathur & Switzerland’s Badan, the Kellner Cup marks the end of the doubles season with neither player entered in the world doubles.

“It just speaks very highly of these guys, they’re true gentlemen on and off court and what they’re doing for the game right now is extremely incredible,” Mathur said. “They dominated this season, they dominated today, so I just want to congratulate them on a phenomenal season. You guys are too good.”

Mudge & Gould reciprocated their praise for who have become regular final opponents over the past two seasons.

“It just goes to show these guys are an absolute class act,” Mudge said of Mathur & Badan. “Ben and I are the seniors on tour so when we’re done and dusted, these guys will be holding the mantle, and I suspect they will be for a long time. They have a great respect for the game, and a great respect for the membership that supports this great game of ours. So well done to them on a great season.”

“Thanks to the one and only Mr. Kellner,” Mudge continued. “He’s a very special man. His accolades and what he’s done for this club and sport is quite mind-blowing, and he does it in such a sincere, nice, humble way. I think we could all learn something from the way George conducts himself professionally and personally. I hold you in a very high regard, George, thank you very much.”

Mudge & Gould marked the end of their fifth season playing together, and now target their second world title together next week.

“Thanks to my very best friend in the world, Ben Gould. He’s a fantastic guy, and it makes these experiences that much better. Playing by each other’s side, hand in hand literally, mentally, physically. We’re always on the same page, and it’s an absolute treat and pleasure to be on court with Ben. So thanks for our friendship, on and off court.”

Gould reflected on the past three seasons of the SDA tour after the transition from the ISDA to SDA, and the subsequent growth of the professional doubles tour.

“About three years ago, the tour had a major makeover, and there are six guys, most of them here tonight, who helped make that transition happen: Mark Dowley, Mark Hayden, Kevin Luzak, Peer Pederson, Patrick Turner, and Morris Clothier,” Gould said. “They all stepped up at the beginning of that, and now our tour has tripled in prize money, tripled in number of events, and almost quadrupled in number of members. Those guys were at the beginning, and we’re still growing, so we can’t thank them enough for putting together this tour.”

“To my partner, Damien, we’ve known each other since we were twelve years old, so twenty-six years now. It’s funny, I said this last week, but now we’re the seniors on tour, which is hard to believe. This is our fifth season together. As Damien said, our years are getting shorter that we’re able to play this game, so I’m happy to be on court every second with you, alongside a friend I’ve known for that long and respect that much. Well done again today, you were an absolute animal on court. Thirty-eight-years old and he’s probably the fittest guy on tour, which you have to admire and respect.” 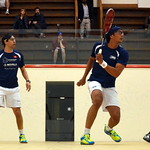 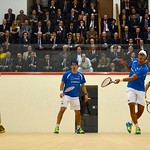 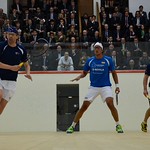 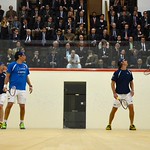 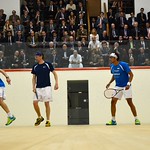 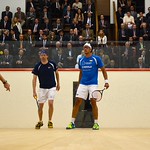 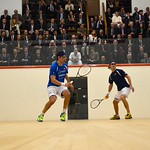