Playing in just their third SDA tournament, the Toronto-based tandem added the Challenger title—restricted to those ranked outside the top eight in a full eight-team main draw—to their 2014 Canadian National Doubles title at the Pittsburgh Golf Club in western Pennsylvania.

Clarke & Arnold were set to open their tournament against top-seeded Hamed Anvari & Viktor Berg, who won their first title together in St. Louis a few weeks ago, but Anvari fell ill with the flu the day before the tournament forcing the top seeds to withdraw. In their stead, locals David Edwards & Timothy Heneroty stepped in, but Clarke & Arnold comfortably quelled the natives 11-4, 11-4, 11-5.

Brothers John & Dan Roberts awaited Clark & Arnold in the semis following a four-game victory over Robert Burns & Jordan Greenberg, and took the only game off the eventual champions, falling 15-13, 8-15, 15-8, 15-9.

For Clarke & Arnold, the title serves at the validation of a developing partnership over the past two years.

“This first season has been a lot of fun playing with Scott,” Clarke said of his partner. “We only decided at the last minute to play Canadian Nationals because we are good friends and thought it would be a fun experience. We never thought we would win the event but after the victory we decided that it would be a good idea to play a few doubles events when our schedule allowed it. We’ve enjoyed the tour so far and plan on playing a couple more events before the end of the season.”

Cambridge Club professional and doubles stalwart Jamie Bentley helped teach the Toronto-based team on their road to a national title.

“The transition from singles to doubles is not easy, but being from a singles background definitely helps,” Clarke continued. “The two sports are completely different and it takes a while to get used to the ball and movement that doubles presents. Working at The Toronto Cricket Club which is primarily a doubles club (and Scott at the Badminton and Racket) has helped and we’ve had a lot of help from those who have played more than us understand the game, especially Jamie Bentley who’s given us some of his time to help teach us.”

“The members of the club were very welcoming and friendly to chat and have conversations with,” Clarke said. “The club is beautiful, I love the old look and feel that the club has kept over the years, the character is still alive.” 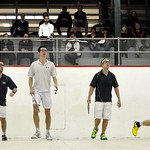 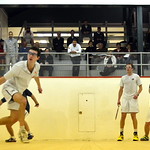 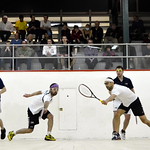 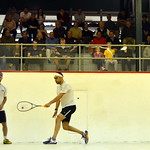