As the ominous “Juno” storm swept through Greenwich, Connecticut, Monday afternoon, so too did Squash Doubles Association (SDA) world No. 1’s Damien Mudge & Ben Gould through the $40,000 Chilton North American Open main draw at Greenwich Country Club, the Field Club of Greenwich, and Round Hill Club. As they did two weeks ago in the $40,000 Putnam Pro-Am, Mudge & Gould claimed the title without dropping a game, adding Mudge’s twelfth NAO title to his record-breaking eleventh in 2014.

In 2014, Mudge broke former teammate Gary Waite’s record of ten North American Open titles with his eleventh. Together, Waite & Mudge won six consecutive North American Opens from 2000-2006. Of Waite’s other four titles, three took place from 1997-1999 with Mark Talbott with his first in 1994 with Scott Dulmage.

Building on his six titles with Waite, the thirty-eight-year-old Australian picked up his seventh and eighth titles—shifting to the left wall from the right—with Viktor Berg in 2008 and 2010 before notching his ninth and tenth on the left wall with current partner Gould in 2011 and 2012.

Mudge & Gould’s first two matches in the main draw of sixteen teams both came against qualifiers. Mudge & Gould first eased past Johan Detter & Ned Marks in three games, before spoiling home hopes against Steve Scharff, head professional at the Round Hill Club, on his home court with partner Bernardo Samper in the quarterfinals.

The rising partnership of Mike Ferreira & Jonny Smith awaited Mudge & Gould in the semifinals. The Trinity graduates advanced to the semifinals following an injury to fellow Bantam Shaun Johnstone, which forced Johnstone and partner Will Mariani to concede the match in the third game. Mudge & Gould maintained their perfect record against Ferreira & Smith, however, holding off the world No. 7 and world No. 6 15-13, 15-9, 15-5, setting up their fifth final of the season against world No. 4 Manek Mathur & world No. 3 Yvain Badan.

Second-seeded Mathur & Badan headed the bottom half of the draw, which saw third-seeded Randy Lim & Clive Leach fall in their opening match. Graham Bassett & Chris Callis recovering from 2-0 down in games against Lim & Leach, to win the match in five. Playing in their second tournament together after winning their maiden title, the St. Louis Open last weekend, Hamed Anvari & Viktor Berg ended Bassett & Callis’ tournament to set up a St. Louis semifinal rematch against Mathur & Badan. Mathur & Badan avenged their three-game loss last weekend with a three-game victory of their own to reach the final.

As winter storm Juno rolled into the region, Mudge & Gould rolled though the final 15-7, 15-13, 15-12 in their closest match of the tournament, and fourth win out of five finals against Mathur & Badan this season.

After losing in two consecutive tournaments this fall, Mudge & Gould haven’t dropped a game in their last three tournaments: the Jim Bentley, the Putnam Pro-Am, and now the North American Open.

“Ben and I haven’t dropped a game in our last three tournaments, so we’ve definitely rediscovered our intensity and that’s certainly reflective of our results. We’ve been playing some great squash so it’s good to get back to where we were before,” Mudge said.

“The NAO has so much history, playing it is always a special event, just like the Johnson coming up in a few weeks,” Mudge said of two of the mainstay tournaments on the SDA tour. “I take quite a bit of pride in playing in and trying to do my best in those tournaments. So it’s nice to be involved in, and also be successful in tournaments of that stature.”

The seventy-fifth NAO doubles was hosted alongside the Harrow Greenwich Open singles—held for the first time in an invitational format with professional men’s and women’s draws.

“They have a great format for this tournament in Greenwich between the three clubs, and strike a great chemistry between the professional men’s doubles and women’s singles as well as men’s this year,” Mudge continued. 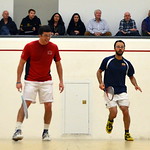 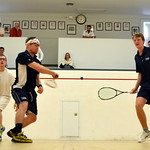 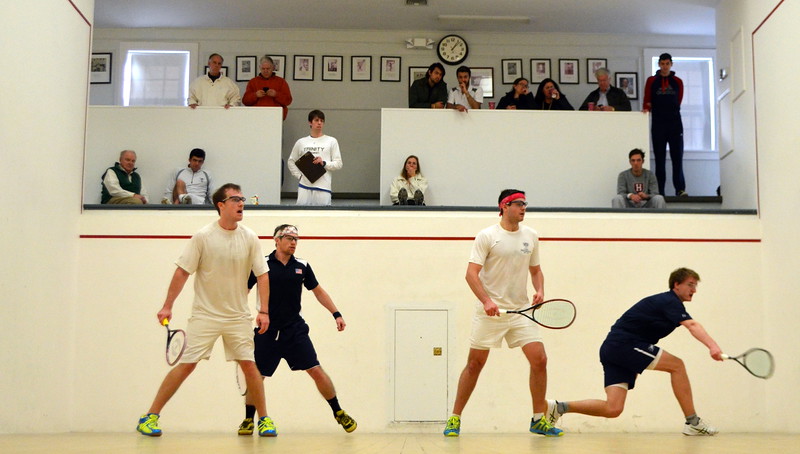 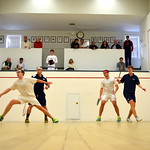 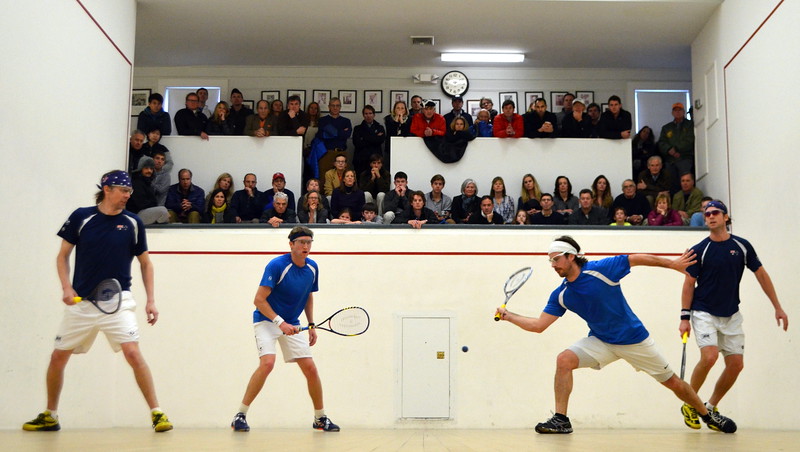 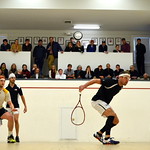 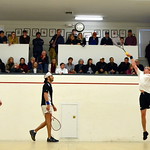 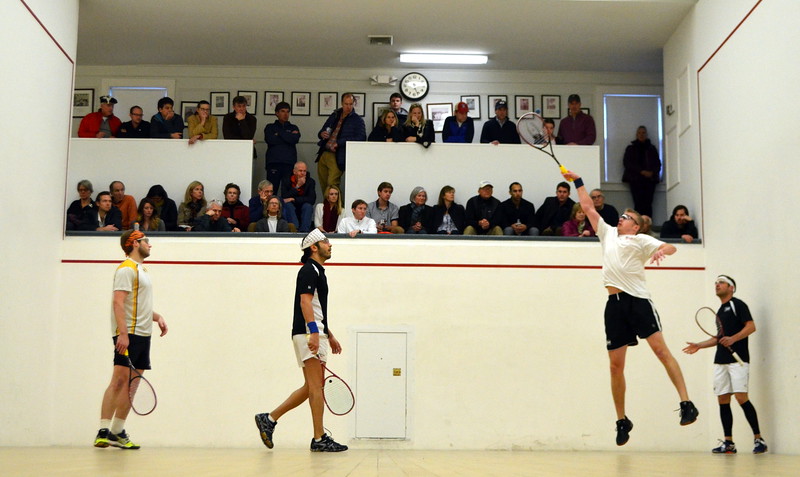 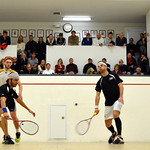 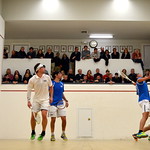 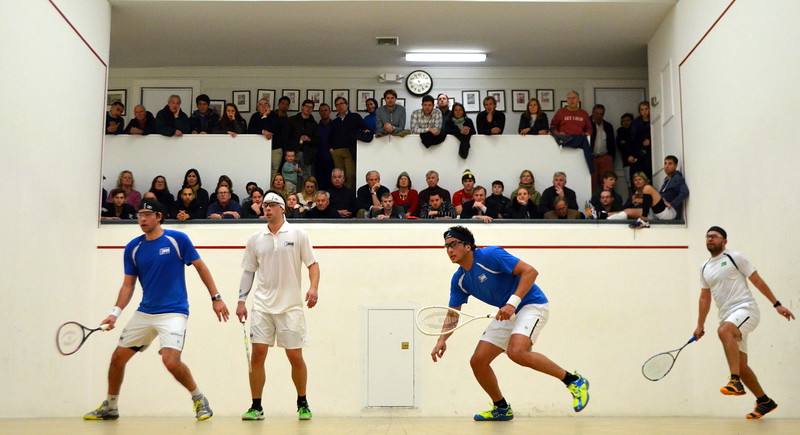 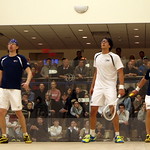 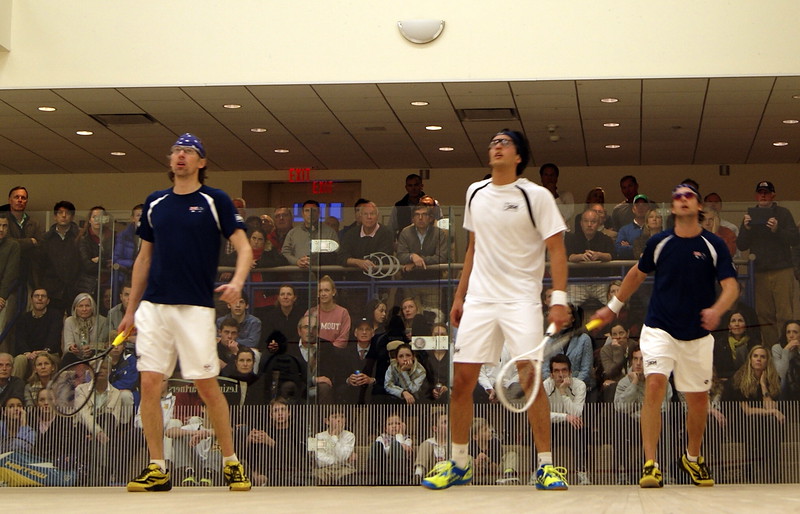 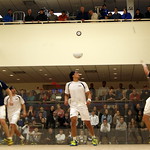 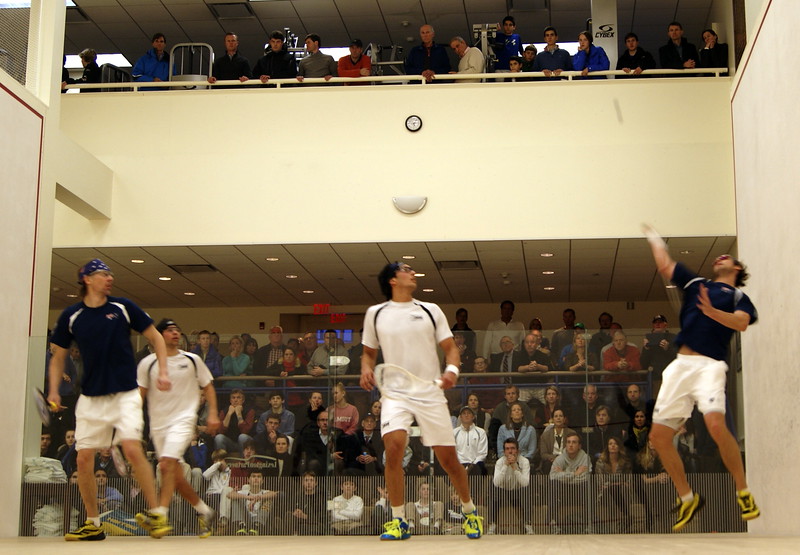 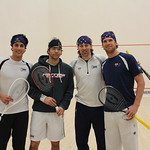 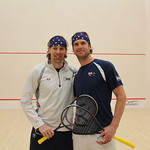 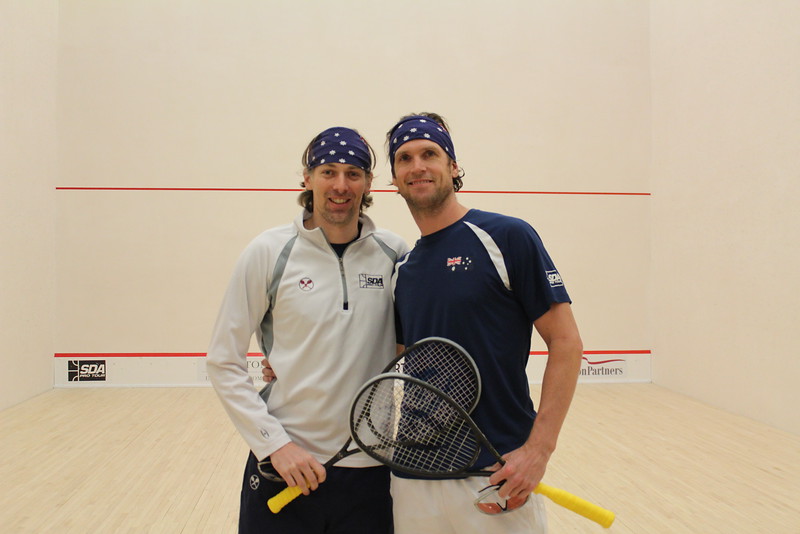 With his three-game Chilton North American Open final win Monday evening alongside partner Ben Gould over Jonny Smith & Greg Park, Damien Mudge has broken Gary Waite’s record of ten North American Open titles with his eleventh in the seventy-fourth iteration of one of the most storied events on the Squash Doubles Association (SDA) tour.

Together, Waite & Mudge won six consecutive North American Opens from 2000-2006. Of Waite’s other four titles, three took place from 1997-1999 with Mark Talbott with his first in 1994 with Scott Dulmage.

Building on his six titles with Waite, the thirty-seven-year-old Australian picked up his seventh and eighth titles—shifting to the left wall from the right—with Viktor Berg in 2008 and 2010 before notching his ninth and tenth on the left wall with current partner Gould in 2011 and 2012.

“Gary was a great doubles player and friend who taught me a lot on and off court, and someone whom I looked up to,” Mudge said. “I’m grateful to have the opportunity to beat his record, which I didn’t think would happen. It was a special moment.” END_OF_DOCUMENT_TOKEN_TO_BE_REPLACED