The tournament’s sole upset was courtesy of Kyle Martino & Adam Perkiomaki, who held off a five-game comeback against three seeds Alex Domenick & John Roberts, advancing to the semis 15-9 in the fifth.

Alexander & Bamber advanced to the final without dropping game, dispatching locals James Asher & Ricky Weisskopf in the first round and Canadian four seeds Carl Baglio & Robert Nigro in the semifinals.

Bassett & Park also recorded two three-game wins to reach the final, first against Sujat Barua & Ben Hughes in the first round followed by Perkiomaki & Martino in the semis.

The final proved to be all Alexander & Bamber, who after edging a close second game 15-12, emphatically clinched the title 15-2 in the third.

“It’s been a good past two seasons learning more and more about the game with each tournament I play,” said Bamber, who earned a career-high ranking of world No. 12 this month. “Partnering with Zac this past weekend was a great experience and it’s nice to win my first event with a very good friend!”

While the Tompkins Cup marked their first proper appearance on tour together, Alexander & Bamber are well acquainted with each other having worked together at the Round Hill Club in Greenwich, Connecticut.

“We’ve played many times together since we worked at Round Hill so we had a good understanding of each other’s game and personality,” Bamber said. “It’s great to play with a player of Zac’s caliber as you know he won’t be making many errors throughout the match and reads the game so well–even on the left wall.”

Alexander, who also reached a career-high ranking this month at world No. 8, marks his third title of the season.

“The Racquet Club of Philadelphia took great care of us this weekend,” Bamber said. “I had a lot of fun playing in the Pro-Am and ended up winning it with my partner Rob Gundlach.”

The Tompkins Cup has been hosted as a full ranking event every other year since 2012. Colombia’s Bernardo Samper earned his second SDA Tour title of the season during the weekend of his thirty-fifth birthday with first-time partner Chris Callis in the Tompkins Cup final Monday night at Racquet Club of Philadelphia.

Samper, who reached the final of the 2015 Tompkins Cup with Baset Chaudhry, went one better after joining forces with Callis. Samper & Callis, the two seeds, got off to a running start with a three-game opening win over Travis Judson & Parth Sharma, but found themselves one game away from elimination in the semifinals when three seeds Imran Khan & Greg Park earned a 2-0 lead. Samper & Callis recovered to reach the final with an emphatic fifth game 11-15, 10-15, 15-9, 15-12, 15-5.

“All credit to Imran and Greg in the semis,” Samper said. “They completely outplayed us in the first two games. We found our length on the third game, which gave us more openings to attack. I knew Chris and I were keeping ourselves mentally tough through the hard rallies and that was going to pay off. There was just a good energy between us.”

“The final could’ve been any direction,” Samper said. “We just managed to play better the last rally of each game. Taking the third game was crucial. It was a great final and I respect Yvain and Mikey on and off the court, so for this reason it was my best win so far.”

“Losing in the final in 2015 and coming back this year with a new partner and on my birthday was just very special,” said Samper, who adds the Tompkins title to his 2017 Missouri Athletic Club Open title. “Thank you Chris for hanging in there with me. Hopefully next year I can come back to another final.”

In 1904, an Englishman by the name of Fred Tompkins moved stateside to take up the head professional position at the Racquet Club of Philadelphia. Three years later, Tompkins—who was part of a tennis family dynasty in England—changed the landscape of American squash by inventing what is now known as North American hardball squash doubles.

In 1907, RCOP switched clubhouses where there were five squash singles courts, two racquets courts and a court tennis court. Tompkins singled out some unused space on the fourth floor of the clubhouse that was too large for another squash singles court, and too small and low-ceilinged for another racquets court. Tompkins instead created a brand-new game, squash doubles.

One hundred and eight years later, a tandem of Englishmen in the form of John Russell & Clive Leach aptly honored their countryman, championing what has become largely a North American sport in winning his namesake tournament—the Tompkins Cup.

The bottom half of the draw saw two more pairs of Bantams face off in the semis. After making waves in his SDA season debut in 2014, often partnering with Mike Ferreira, Baset Chaudhry returned to the SDA fold in his first appearance this season due to occupational obligations. Chaudhry, a Pakistani international, partnered with Colombian Bernardo Samper, winning their opening match to face his second-seeded former partner, Ferreira, and Jonny Smith. A five-game semifinal ensued with Ferreira & Smith edging to a two-game lead, but Chaudhry & Samper responding to win the third and fourth. With a final appearance against Russell & Leach on the line, Chaudhry & Samper prevailed in the fifth 15-11.

Monday evening’s final stood evenly after two games, with Russell & Leach taking the first 15-7, and Chaudhry & Samper taking the second 15-11. Russell & Leach regained complete control for the rest of the match, however, commanding the third and fourth games 15-4, 15-5 to win their second title of the season.

“It was great to win our second event of the season,” Russell said of their second title this season. “Being seeded and expected to win was a different sort of pressure for us.”

“The first game of the final, Baset and Bernardo were a little slow probably due to their long match the previous day, but they came back strong in the second,” Russell continued. “In the third and fourth games we extended the rallies a little more, got off to good starts and managed to keep the lead throughout the games.”

“I’d like to thank all of the Pro Am players and sponsors for making the event possible, and also to Rob Whitehouse and his staff for running a fantastic event.”

View all scores on the Tompkins Invitational tournament page. 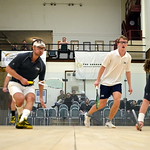 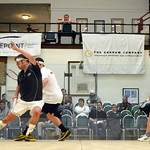 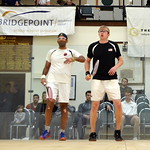 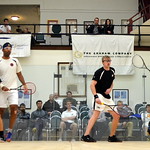 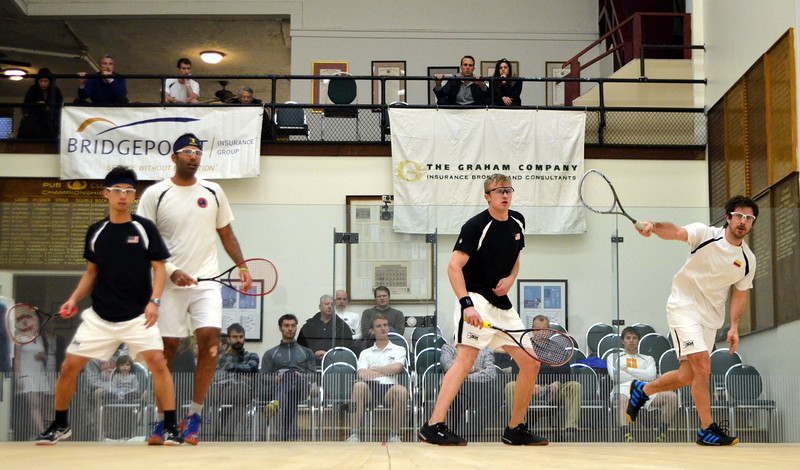 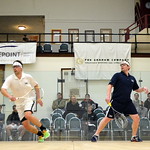 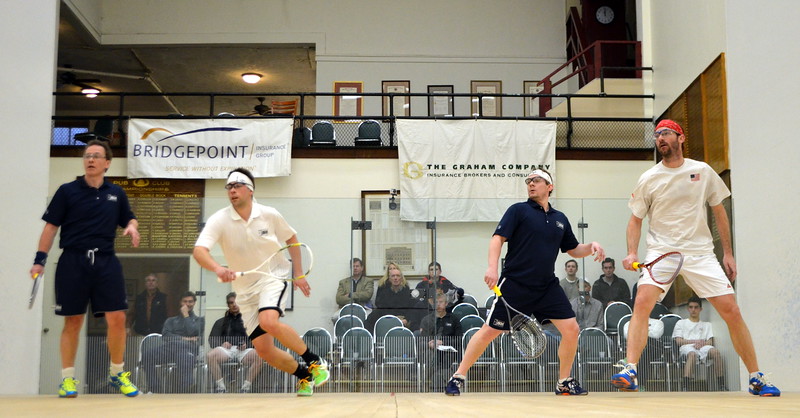 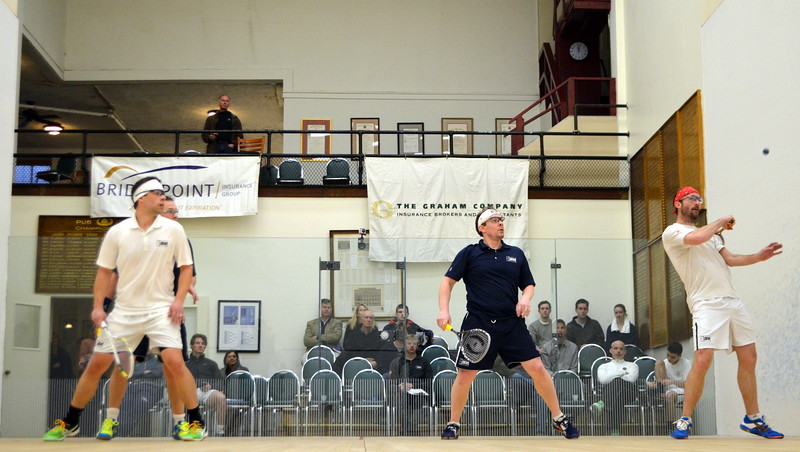 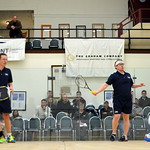 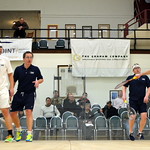 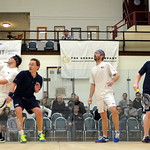 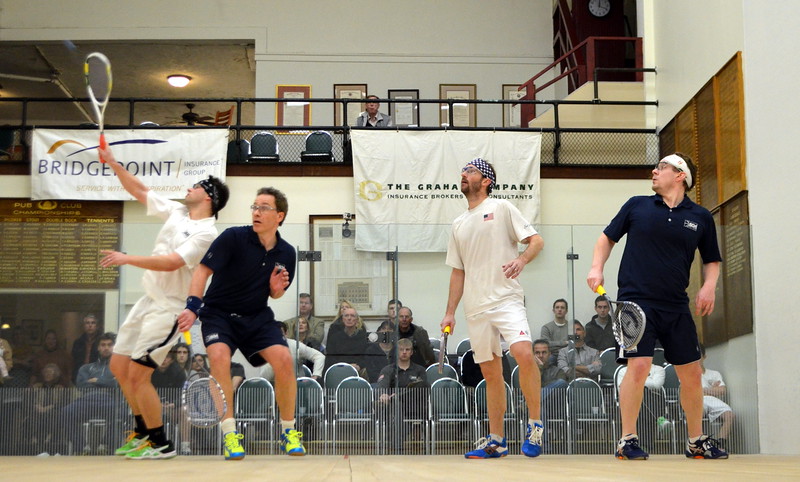 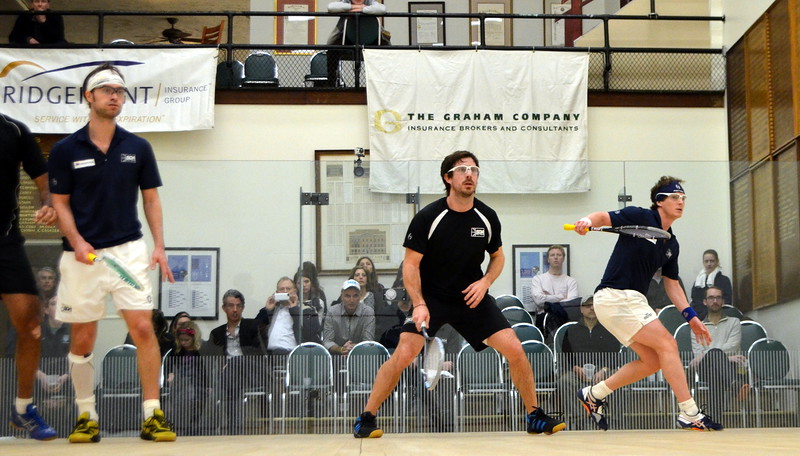 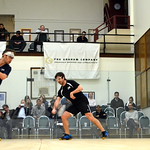 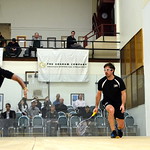 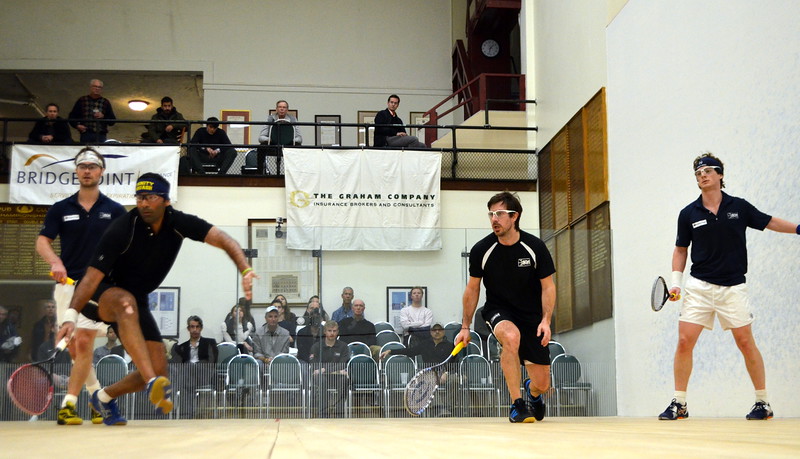 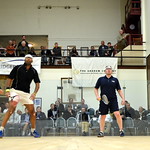 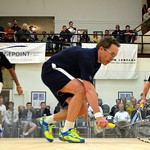 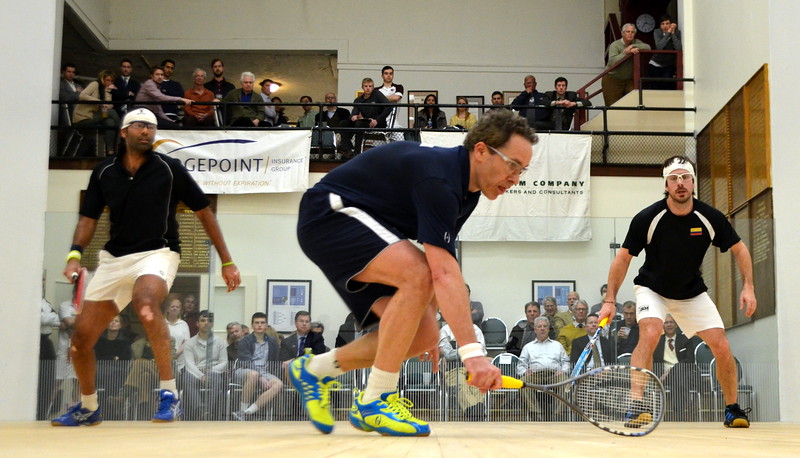 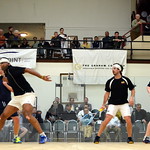 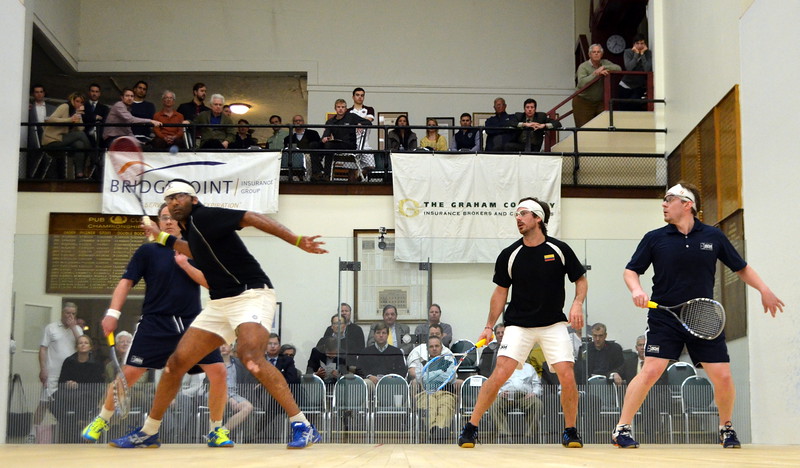 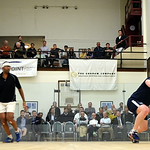 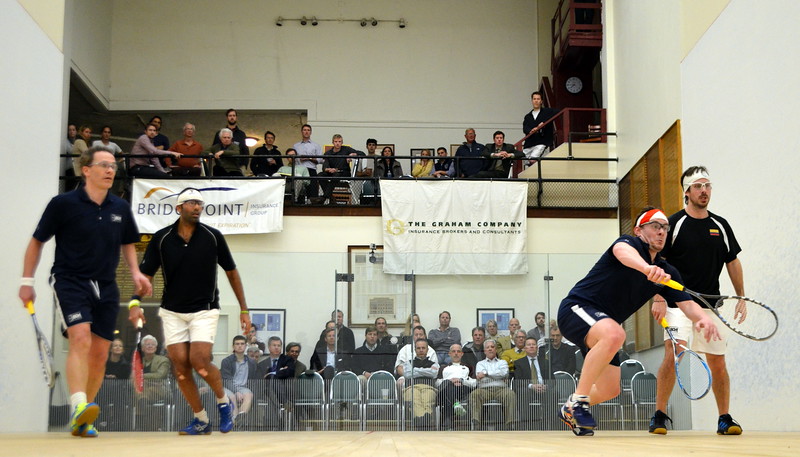 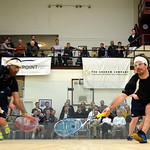 Trailing 5-0 in the opening game against an opponent that had defeated them twice in a row last month, Ben Gould and Damien Mudge exploded on an 11-1 run and never looked back in a convincing 15-11, 8 and 8 victory over Paul Price and Clive Leach this evening in the final round of the $20,000 Tompkins Invitational before an appreciative crowd at the Racquet Club Of Philadelphia. END_OF_DOCUMENT_TOKEN_TO_BE_REPLACED