Boasting their highest career rankings of world No. 3 and 5, James Stout & Greg McArthur continued their ascent on the SDA tour with their second title of the season—the SDA Gold Baltimore Cup at the Baltimore Country Club in Maryland.

Stout & McArthur, who won Sleepy Hollow in December, nearly collected their second title of the season two weeks prior to the Baltimore Cup at the North American Open as the top seeds, falling just short in a five-game final against Robin Clarke & Zac Alexander.

“It’s always nice to bounce back from a loss with a victory like this,” McArthur said. “I was really disappointed after the NAO final loss. I felt like I wasn’t at my best, so was determined to prepare better for this tournament and it seems to have paid off.”

“After playing a great tournament in the North American Open and falling just short in the final, we wanted to prove to ourselves that we could do one better in this event,” Stout said.

The motivation to improve on their NAO result shone through as Stout & McArthur entered the draw as two seeds, opposing top seeds Bernardo Samper & Yvain Badan.

Stout & McArthur progressed to the final without dropping a game, including a semifinal win over Canadian three seeds Will Mariani & Thomas Brinkman.

Americans Graham Bassett & William Hartigan pulled off the tournament’s biggest upset in the quarterfinals, taking out four seeds Omar El Kashef & Jordan Greenberg in three games. Bassett & Hartigan continued their momentum against Samper & Badan in the semis, earning a 2-1 advantage, but the top seeds bounced back to reach the final in five games 15-13, 12-15, 14-15, 15-7, 15-8.

“We had a couple of close games in the earlier matches and went into the final excited to play Bernardo and Swiss in another final,” Stout said. “Greg has been playing some of the best doubles I have seen from him over the past couple of months, and he continued that form throughout the final, moving the ball around and hitting winners from some ridiculous positions. Bernardo and Swiss were great opponents and will surely come back stronger with a couple of big events coming up in the near future.”

The result will bolster the top five rankings that both players achieved this month, after edging Badan, world No. 4, and Samper, world No. 6.

“It’s been an exciting season so far,” McArthur said. “I feel like every event has had three or four teams that could potentially win it. I’m just happy that James and I keep giving ourselves chances to win. James and I have good chemistry on the court. We play to each other’s strengths and feel that when we are at our best we can beat any team. Big thank you to Wade Johnston and all the members at Baltimore Country Club for a fantastic tournament.”

Stout & McArthur enjoyed a successful end to the 2017-2018 season, earning two titles in April and May. In addition to their Sleepy Hollow title this season, Stout marks his third title of the season having won the Westchester Country Club Pro Doubles with Badan.

“We are both excited to have broken into the top 5 in the world this month, and join a distinguished list of players that have gotten that high,” Stout said. “We are enjoying being on tour with a great group of pros, at all of the different events, and meeting the local players and supporters that make the game possible.” Jenson, world No. 9, & Arnold, world No. 8, defeated the top two seeds on their way to the title in what were their biggest upsets on tour to date.

In the bottom half of the draw, two seeds Jonny Smith & Chris Callis progressed to the final without dropping a game, including against Graham Bassett & Fred Reid, who marked their second major semifinal appearance of the season in addition to the Bentley.

“I feel like Scott and I played the way we have always thought we could. It just all came together this weekend,” Jenson said. “Obviously, both of those teams are extremely talented which probably increased our motivation to test ourselves.”

Jenson has been pleased with the way the partnership has developed in their first season together.

“It’s been great playing with Scott,” Jenson added. “He is an immense talent. Like any team sport it takes some time to develop the right/best chemistry. I think this weekend showed what we are capable of doing and it was great to finally put it together.”

“It’s tough winning any event,” Jenson said. “The opportunities don’t always come your way so you have to take your chances when they come. I was just really impressed with Scott and his ball striking and shot selection. The Baltimore Cup comprises a membership that are knowledgeable about the game. Glad we got our first win together.” World No. 3’s Manek Mathur & Yvain Badan earned their third SDA title of the season this weekend, dropping just one game on their way to a maiden Baltimore Cup at Baltimore Country Club in Maryland.

The Trinity grads entered the tournament seeded second with the draw predicting a fourth final this season against top seeds Damien Mudge & Viktor Berg, who were fresh off their victory at the David C. Johnson, Jr. Memorial.

The Johnson champions were stopped in their tracks during their opening quarterfinal when Berg picked up an injury, forcing the title favorites to retire against Matt Jenson & Hamed Anvari.

World champions John Russell & Clive Leach filled the void in the top half of the draw with two dominant three-game victories over qualifiers Peter Kelly & Dylan Patterson in the quarters and Jenson & Anvari in the semis.

The two seeds then met Johnson finalists Mike Ferreira & Chris Callis in the semis. Ferreira, another Trinity alum, and Princeton grad Callis pushed the two seeds, taking their only game lost in the third, but fell short losing in four 15-11, 15-11, 9-15, 15-13.

All three previous editions of the Baltimore Cup had been won by Mudge & Ben Gould. Mathur & Badan’s third title of the season is also their third maiden tournament title, adding to their first Putnam Pro-Am and North American Open titles since January.

“Baltimore is a great place where over the years, we have formed many many friendships,” Badan said. “We are very attached to the people of that city. So to share that win with our friends is a great feeling.

“We would like to thank everyone in Baltimore who make the event possible, and Jordan Greenberg, the SDA site rep who brought a lot of enthusiasm during this event!”

One week after winning the longest-standing tournament on the SDA Pro Tour—the David C. Johnson, Jr. Memorial—world No. 1’s Damien Mudge & Ben Gould have extended their hegemony over one of the tour’s youngest events by winning their third Baltimore Cup title in the tournament’s third year at the Baltimore Country Club.

Seeded first all three years, the Australian powerhouse once again held true to their seeding, dropping only one game on their way to the title, which also happened to be their first against Joshua Schwartz & Ian Power. Schwartz & Power had recovered from 2-0 down against Ed Garno & Narelle Krizek, to win their opening match in five games. Schwartz & Power held a surprise 1-0 lead over the heavy favorites with a 15-12 win in the first, but ultimately squandered their early lead to lose the quarterfinal in four games 15-12, 9-15, 5-15, 5-15.

Mudge & Gould endured another challenge from fourth-seeded Fred Reid & Raj Nanda, who defeated Carl Baglio & Jeff Osborne in their opener. Baglio & Osborne—who made the trek from Australia—had previously come out on the winning end of the only other five-game match of the tournament over Aaron Lugue & John Woodhams. In their semifinal, Reid & Nanda pressed the eventual champions into three tight games, but fell short 15-13, 15-14, 15-13.

The final match up was the eighth between the tour’s top two teams this season, and a repeat of last week’s Johnson Memorial final, with Mudge & Gould boasting a 7-1 record over Mathur & Badan this season.

Unlike a narrow final between the two sides in Brooklyn, Mudge & Gould commanded the final to win the two bottles of champagne in three games 15-10, 15-12, 15-12, while Mathur & Badan were consigned to six packs National Bohemian.

Mudge admitted the world No. 1’s are looking forward to a few weeks of rest before the season culminates with the Tavern Invitational, $50,000 Kellner Cup, and World Doubles in May.

“Every match we played this weekend we got more and more focused,” Mudge said. “It’s been a tough couple of months in particular playing back-to-back with the Johnson last weekend. We are both excited to have six weeks off.”

“Baltimore is very enthusiastic when it comes to squash doubles,” Mudge said of the host venue and city. “We see some of the more passionate spectators watching, it makes it fun to play in front of them.” 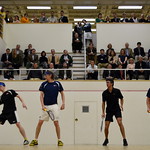 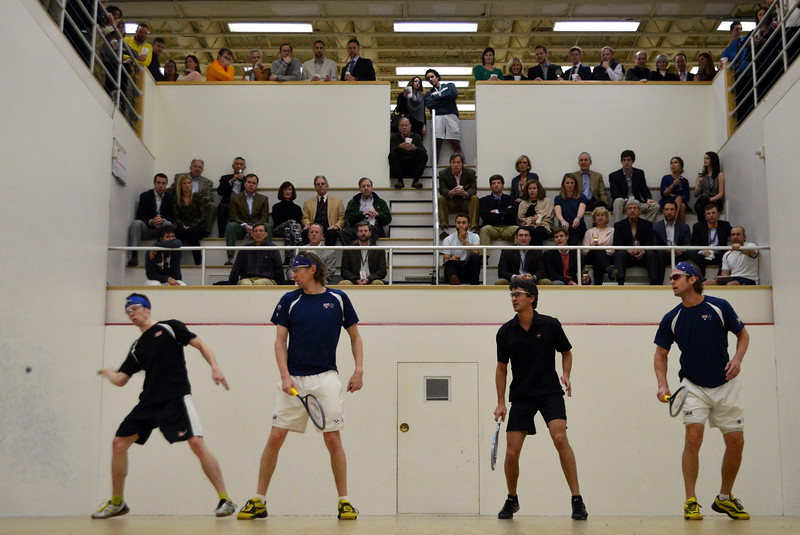 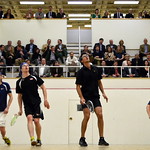 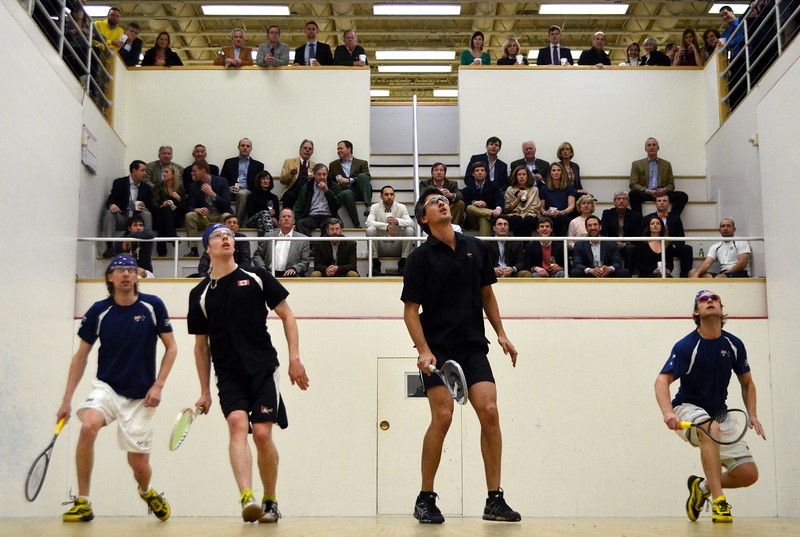 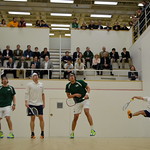 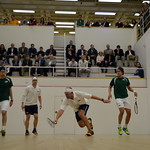 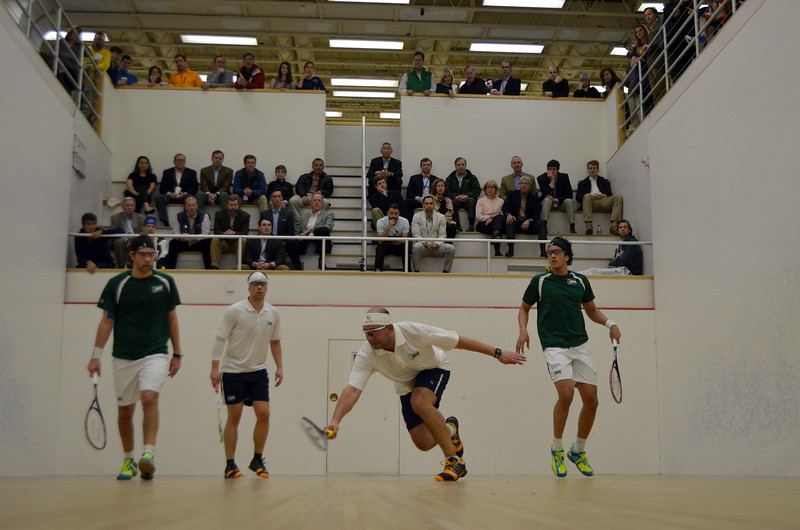 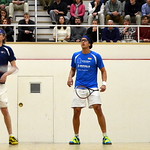 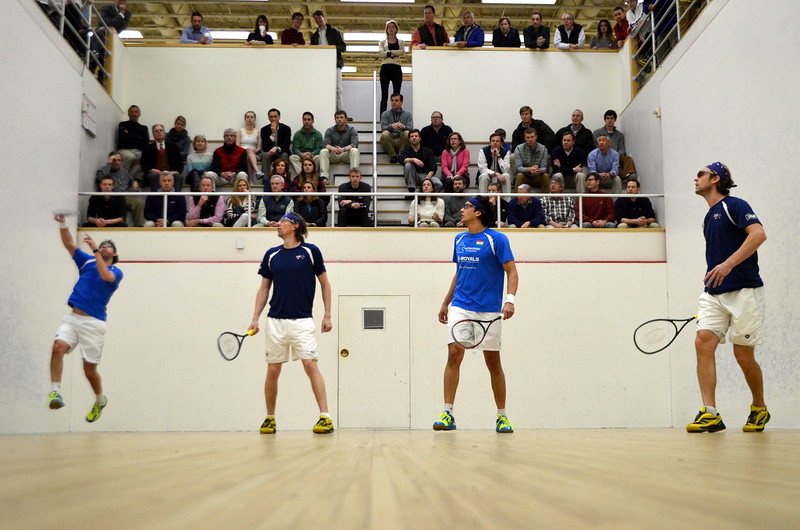 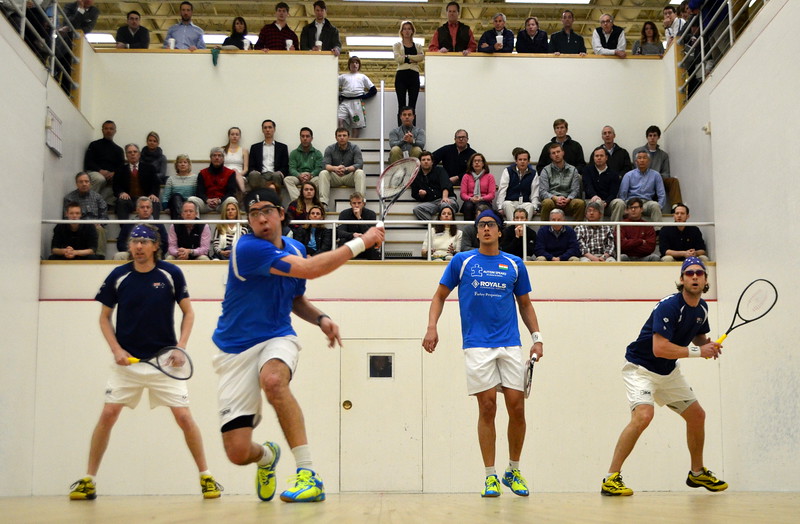 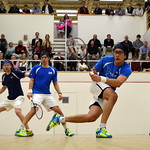 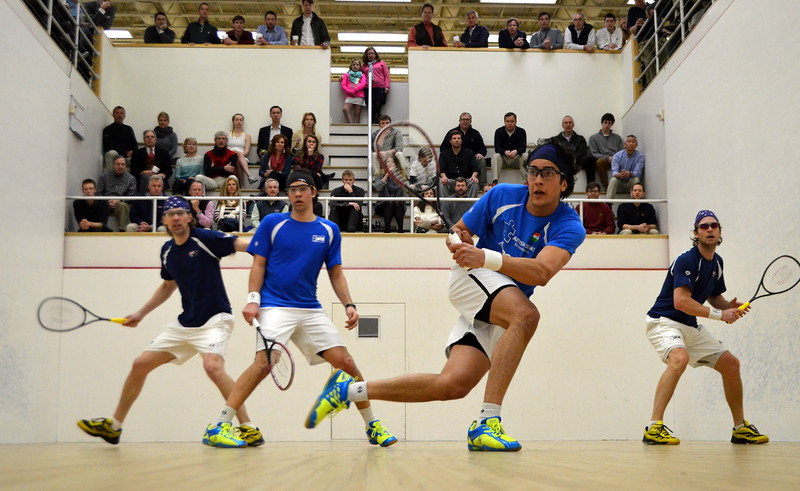 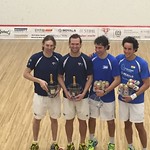 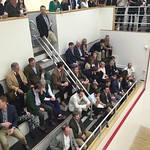 Last weekend, the World Doubles Champions’ route to the title seemed effortless without dropping a game on the way to the title. By contrast in Baltimore, the joint world No. 1’s yielded the occasional blemish on what was otherwise another stellar title run.