Russell & McAthur overcame two Canadian teams in three games on their way to the final. First, Mark Porter & Rafik Bhaloo in the quarterfinals 15-1, 15-10, 15-7. After a close 15-14 opening game in the semifinals against Joshua Hollings & Martin Henderson, Russell & McArthur plowed through 15-1, 15-5 to reach the final held later that evening.

Hollings & Henderson proved that they are an up and coming partnership having produced the biggest upset of the tournament in the quarterfinals–a five-game comeback over four seeds Clinton Leeuw & Omar El Kashef.

In the bottom half of the draw, Canadian two seeds Will Mariani & Cole Osborne quickly progressed to the semifinals after just three points due to a ruptured Achilles sustained by Matt Jenson. Jenson’s attempted come back this year now comes to an end, and follows rupturing his other Achilles  at the PDC cup in 2014. Former St. Louis-based pro Adam Bews & Colin West then took out the two seeds in the semifinals 15-12, 15-3, 5-15, 15-5.

The title marks both Russell & McArthur’s first of the season. A different partnership has now won all four SDA events of the season thus far. The title also boosts Russell’s bid to retain the world No. 1 ranking, having reclaimed it this month after Chris Callis took the mantle in October.

“I’ve lost in the final a few times so it’s great to finally get my name on the trophy,” Russell said. “Playing with Greg was a real pleasure, we both like to shoot so it made for some exciting squash. Mike Puertas runs a fantastic event and the members are very knowledgeable and appreciative. I’ve made some great friends at the club over the years so always try to fit the event into my schedule.”

The St. Louis Open, founded in 2002, returned as a full ranking event having been held as an invitational in 2018 and substituted for the World Doubles Championships in 2017, which Russell won.

“John and I have had a couple of great battles while on opposing teams over the years so it was nice to finally team up for an event,” said McArthur, the world No. 5. “Our personalities match up well so it made for some good squash and an enjoyable on court experience. St. Louis was the first doubles event I ever traveled to, almost ten years ago. It’s really special to finally win the event. It’s a great club and I really want to thank Mike Puertas and the members for making us pros feel at home.” With fresh new world rankings of No. 2 and 1 respectively this month, Mathur & Mudge entered their third draw this season as the top seeds, but this time had two seeds and first-time partners John Russell & Viktor Berg opposing them in the draw.

In the bottom half of the draw, veterans Russell & Berg took down Trinity alums Randy Lim & Andres Vargas in four games to reach the semis. With both the semifinals and final on Saturday, Russell & Berg also made sure to reach the final in three games against three seeds Imran Khan & Greg Park.

In the final, Mathur & Mudge dropped their only game of the tournament in the third after taking the first two games, but quickly recovered to emphatically win the title 15-4 in the fourth game.

“Coming off a win last weekend is always nice momentum and confidence,” Mathur said. “We both felt pretty good going into the weekend and were excited to get back out there after Monday night at the New York Athletic Club. Both teams winning the semis 3-0 was big. Between the pro-am play and pro play, Saturday ends up being a pretty long day. That being said, it’s something you know going into the weekend and have to be mentally and physically ready to spend a bunch of hours on court.”

“Samper & Chaudhry are a really solid team and are getting tougher and tougher with every event they play,” Mathur continued. “Two new partnerships are always tough to play against—trying to get a feel for what their tendencies are etc., but having playing against them with their prior partners gave us a good idea of how we should be going about setting up our points and strategy.”

The SDA’s busy month of November continues next weekend in Atlanta with the $40,000 PDC Cup, November 10-12. Damien Mudge & Viktor Berg dropped only one game all tournament to capture their second SDA title of the season, and second career St. Louis Open title since first winning the Racquet Club of St. Louis event in 2008.

Mudge & Berg, who reunited for the first time since 2009 to win the 2015 Delaware Pro Doubles in December, then progressed to the final with a three-game victory over Imran Khan & Greg Park, who had held off Graham Bassett & Andres Vargas in a five-game quarterfinal.

“We played better as the matches went on,” Mudge said. “My foot injury wasn’t feeling great at the beginning of the tournament and began feeling better towards the end, so I was able to move with more confidence, which helped a great deal.”

“I think anytime you play two matches in a day it is very important to get off court as quick and as efficient as possible. We managed to do that in the semis, which helped our case in the finals, especially with Jenson/Quick having a tough Thursday, Friday and Saturday semifinal.”

“The road to the finals is always tricky, and each match had its own unique challenges,” Berg added. “We both knew we had to be efficient in the semis.”

In contrast to the champions’ three-game semifinal victory, finalists Matt Jenson & Preston Quick endured a five-game opener against local pro Adam Bews & Peter Kelly. The veterans then made it through a tight quarterfinal over two seeds Mike Ferreira & William Hartigan. Their semifinal match didn’t do them any favors Saturday afternoon before Saturday night’s final, which stretched to five games against three seeds Raj Nanda & John Roberts.

“We both played really solid in the finals,” Berg said. “I really enjoy playing on the RC courts with nice high ceilings, and their epic stadium-sized score board.”

“They are great guys on and off the court, so it’s always fun being out there with them,” Mudge said of Jenson & Quick.

“A big thank you to Mike Puertas and the members,” Mudge said of the hosts. “He and the membership have done great things for the Racquet Club and doubles hardball.”

“I would like to give a special thanks to Mike Puertas,” Berg added. “He is one of the best pros around. A huge thanks also goes out to all the sponsors, title sponsor Emerson, patrons, pro-am players, and staff at the Racquet Club.”

The 2016 edition of the tournament saw the prize money purse increase from $25,000 to $40,000. The title will boost Mudge & Berg’s confidence going into a third consecutive tournament this weekend as top seeds in the $40,000 North American Open.

The St. Louis Open was one of two SDA events in St. Louis in addition to the Missouri Athletic Club Open.

“St. Louis has obviously stepped up and is really embracing squash,” Mudge said. “It’s great to see. I have dear friends here so it’s fantastic to be back in St. Louis catching up with everyone.” World No. 17 Berg & world No. 24 Anvari then surprised the St. Louis crowds and tournament favorites alike in the semifinals, advancing to the final without dropping a game against top-seeded world No. 4 Manek Mathur & world No. 3 Yvain Badan 15-12, 15-13, 15-14.

The four seeds found themselves up against another pair of Trinity alums in the form of second-seeded Mike Ferreira & Jonny Smith in the final. Aided by what appeared to be an injured Smith, Berg & Anvari captured their first title in their first tournament together in a three-game final 15-10, 15-10, 15-11.

Despite similar playing styles, both Berg & Anvari were excited by their first outing together. “This was my first time playing with Viktor, and I wasn’t sure what to expect because we are both shooters,” Anvari said. “I have always enjoyed his attitude and energy on court and I think we jelled well together. Hopefully he will play a few more events with me after this. I have always enjoyed coming to St. Louis. The Racquet club and its membership treat us so well. It’s great how keen the guys are for doubles squash and it was definitely a thrill for me to beat the top two seeds in front of their packed house. Again a thank you to the to the racquet club of St. Louis for hosting such a great event.”

“Winning against the top seeds was extra special,” Berg said. “The key aspects were slowing down the pace and playing our game. I enjoy St. Louis because of the great people. I would like thank the tour and all the supporters, it was a great event!”

Match replays are available on YouTube including the final below: 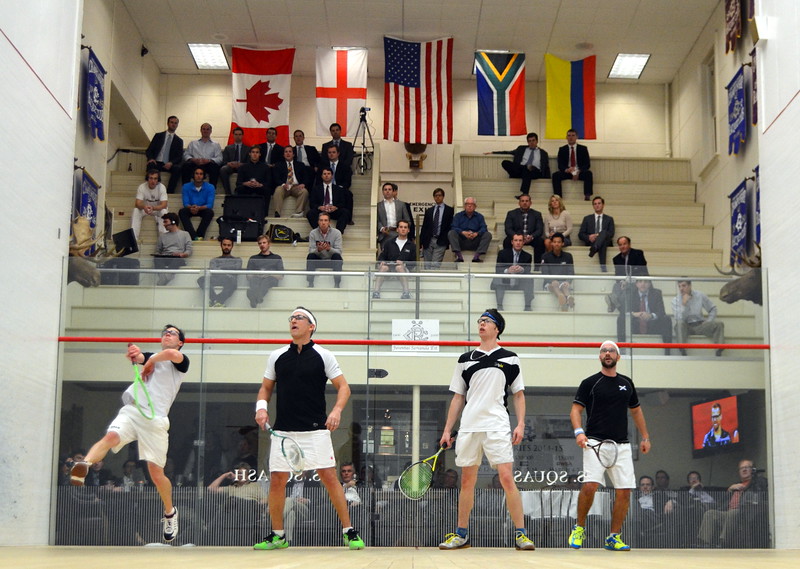 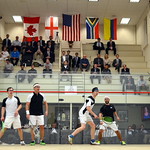 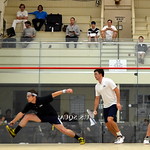 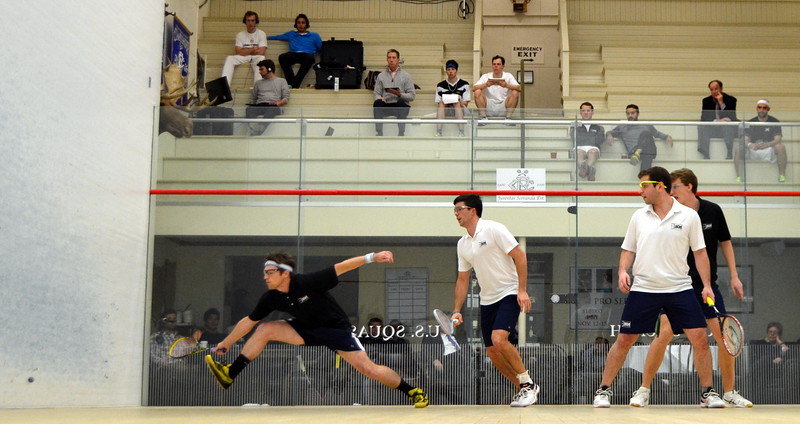 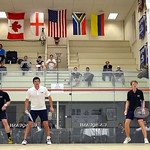 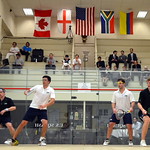 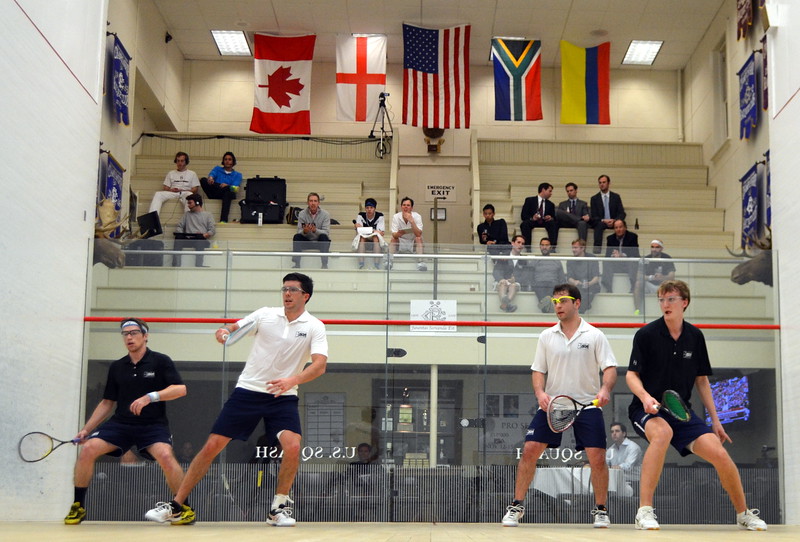 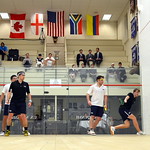 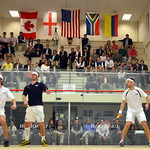 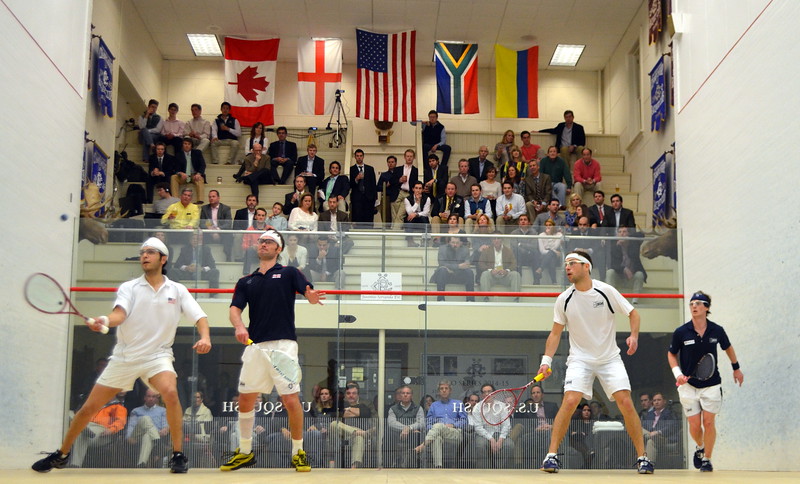 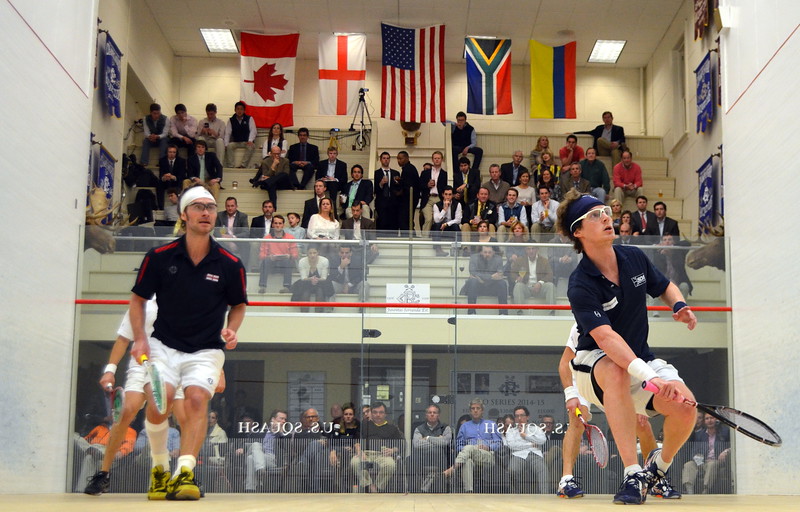 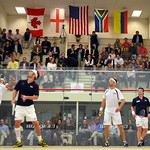 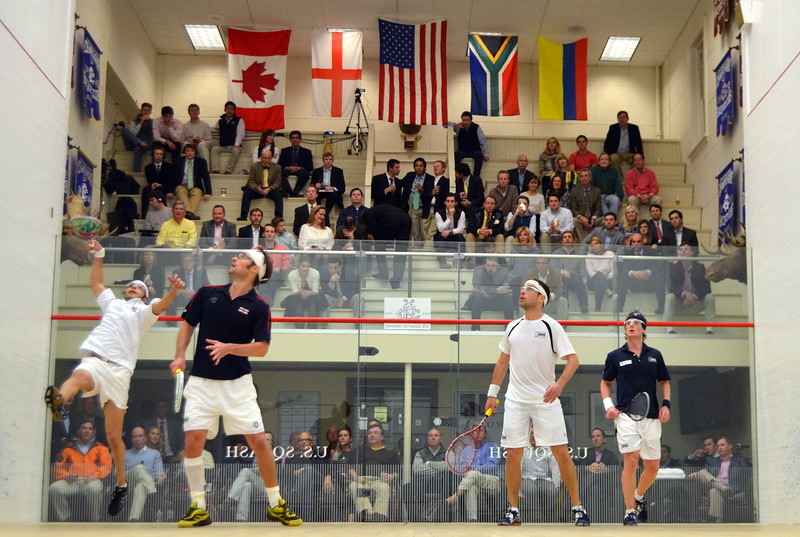 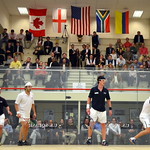 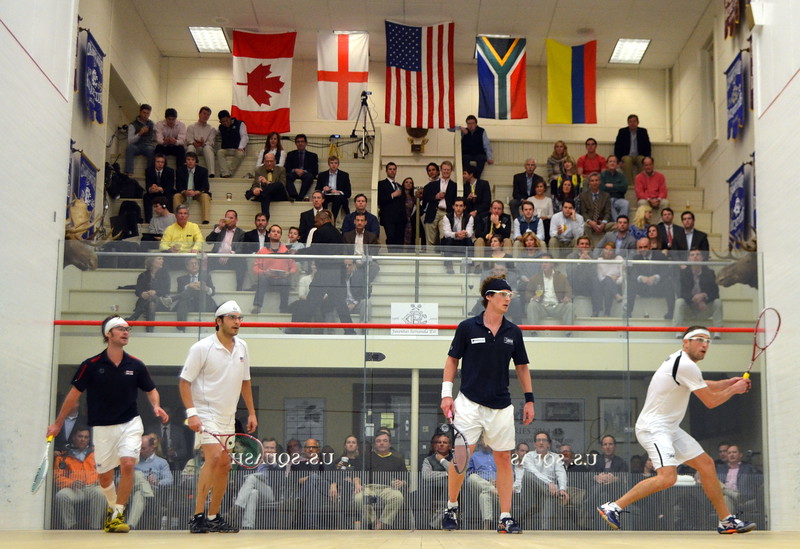 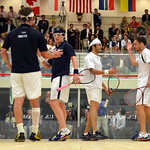 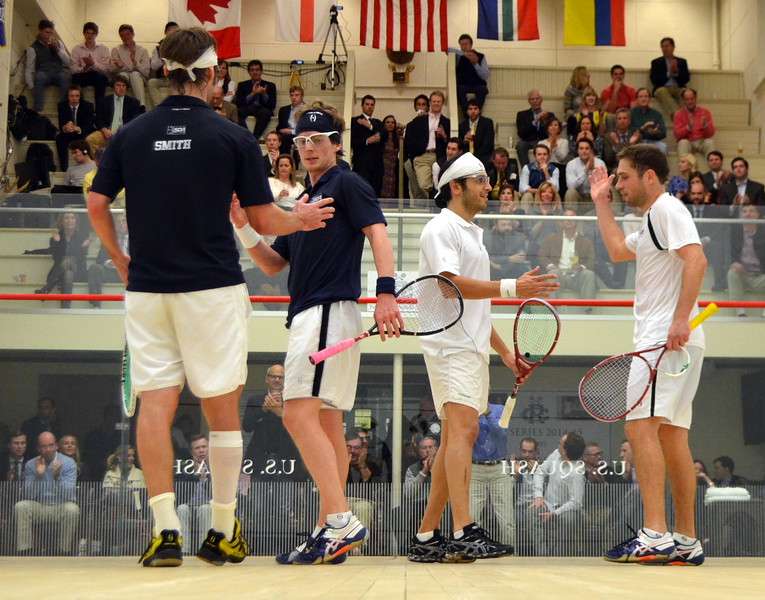 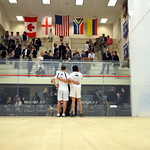 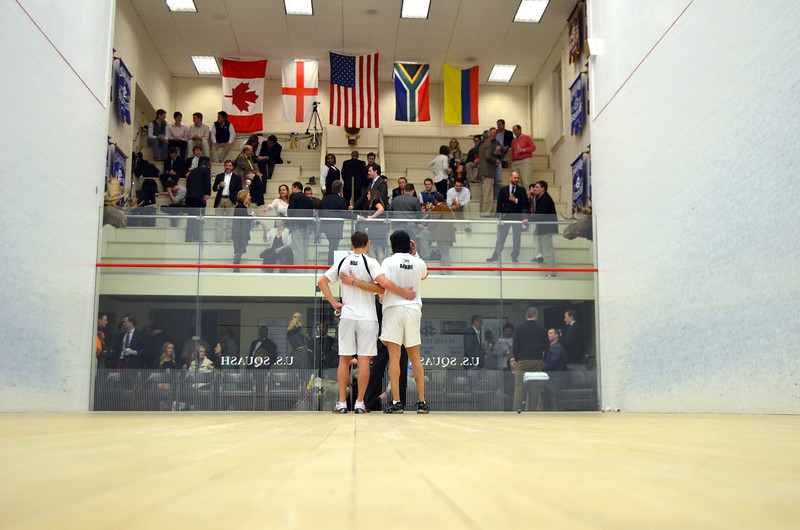